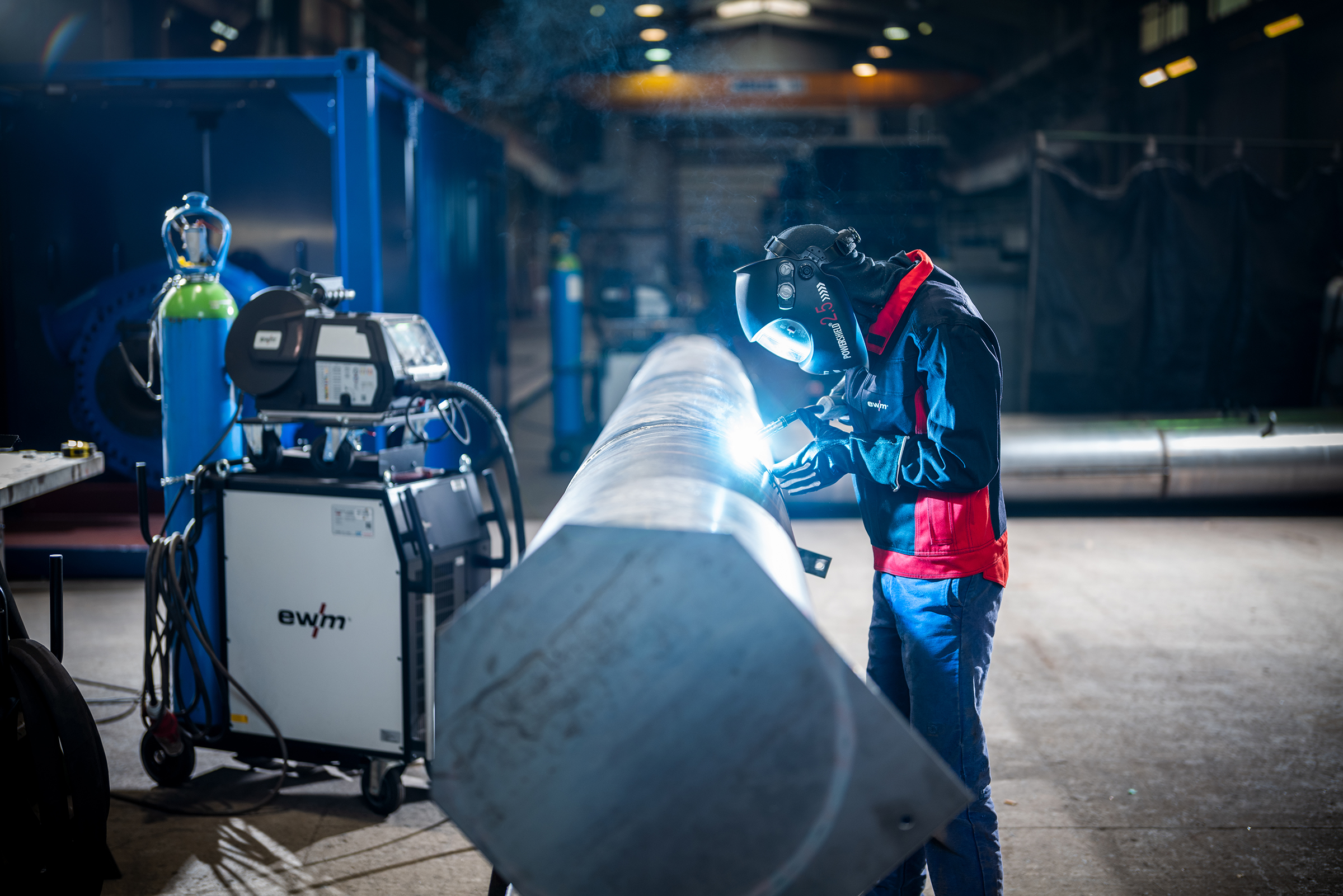 Heinrich Döpke GmbH from Norden has converted its welding production to EWM with 13 new welding machines. In addition to the versatility of the Titan XQ 350 puls and the extensive service, other factors were also convincing. Together with EWM, the machine manufacturer took advantage of government subsidies to save not only CO2, but also costs.

If sand and gravel are being extracted from an inland lake in Europe, there’s a good chance a suction dredger or cutter-suction dredger from Heinrich Döpke GmbH is being used for the job. This Norden-based company in northern Germany is a market leader in the field. Döpke develops, designs, builds and sells turnkey custom machines, including pumps and wear parts like suction and discharge pipes. Bakery machines for the preparation of rye, coarse-meal and mixed-grain doughs as well as shortcrust pastries and fillers are also produced there.

Döpke welds both stainless steel and other steels by hand at their production halls, and some of their components can measure over 20 metres long and several metres wide with plate thicknesses of 5 to 80 millimetres. “We have two welders who weld all day long, including vertical-up and overhead seams,” explained Wilfried Erdmann, Döpke’s production manager. All the other employees can weld, too, and they tack together components at the other welding workstations.

Up until 2020, the welders largely used step switch controlled machines for welding, including Messer-EWM models from the 1990s. From time to time, Döpke purchased new machines, but, according to Erdmann, “we only had negative experiences with inverter technology”. That’s why Werner Buß, field staff at EWM in Ibbenbüren, was initially met with reservation when acquiring new customers. After the very first demonstration of the Titan XQ puls on Döpke components at the production hall, though, Erdmann was impressed. “Its great advancements in technology and electronics are certainly impressive.” EWM’s warranty period of up to five years without limitations on operating hours was also attractive to Döpke. “Other manufacturers don’t do that,” stated managing director Ingo Romeike. Both he and production manager Wilfried Erdmann then began considering the acquisition of three EWM welding machines.

Werner Buß continued, “A possible grant from the German Federal Office for Economic Affairs and Export Control (BAFA) was in the back of my mind, but because of the effort involved, it’s only attractive if you have five or six systems or more.” The fact that Heinrich Döpke GmbH would soon be tackling a large project and that many of their welding machines had failed at the same time also played a role. “It was then that we considered investing in new machines rather than repairing the old ones,” reported production manager Wilfried Erdmann. Ultimately, the government grant was the decisive argument for a complete switchover. The next step was to determine the exact number of machines and for EWM to draw up an offer for the replacement investment. “You can’t make corrections to things like this after the fact. The entire package had been laced up in advance and then submitted. The compensation we received was based on this,” said managing director Ingo Romeike.

Werner Buß contacted the energy consultant, who helped the Döpke company with their application to BAFA. The energy consultant seized the opportunity to obtain the “Federal Grant for Energy Efficiency in the Economy” (EEW), which supports investment measures for the energy optimisation of systems and processes. With this grant, every tonne of the greenhouse gas carbon dioxide saved is rewarded monetarily. The maximum grant for small and mid-sized companies is €700 per tonne of CO2 saved (up to 40% of the total investment costs). For large companies, it’s €500 per tonne of CO2 and up to 30% of the investment costs. With this grant, the government is accelerating compliance with the new EU Ecodesign Directive, which will result in step switch controlled welding machines completely disappearing from the market starting in 2023 due to their high power consumption.

Just under two tonnes of CO2 saved per machine

For the application, the amount of savings had to be precisely calculated for each machine. EWM calculated that switching over to the MIG/MAG flagship Titan XQ 350 puls would result in a difference of 3,652 kWh annually, which corresponds to just under two tonnes of CO2 less than before, per machine, per year. In all, this resulted in a total grant of approximately €18,000 for 13 machines including the allowance for the energy consultant. As they had submitted an application of urgency, Ingo Romeike had already received a positive decision in just under three weeks. At this point, ordering of the machines could move forward.

The welders at Döpke were quick to befriend the Titan XQ puls and Phoenix machines. The fact that all new machines at Döpke have been given names is a sign of affinity: Erika named after the wife, Jenny from Forrest Gump and Dolly named after the sheep. When it comes to advantages, though, their users are objective. “Seam creation is much smoother than before, gas consumption has dropped by more than half and there’s hardly any preparatory or finishing work to do,” reported welders Matthias Heidkamp and Keno Konken. Production manager Erdmann confirmed that, “we can now weld with the machines with virtually no spatter to speak of, which before wasn’t possible at all”.

Use of gas and wear parts reduced enormously

Both senior managers at Döpke also agreed that investing in DGC electronic gas flow control was well worth it. “I quickly realised that a large amount of gas was being saved,” said Ingo Romeike with a smile. Wilfried Erdmann put it in more concrete terms: “We used to replace a shielding gas cylinder every two and a half days. Now, we do it about every week and a half.” The use of wear parts has also been reduced. With the EWM PM 451 welding torch, they now use only two or three contact tips a week, as opposed to the previous two or three on a daily basis. The bottom line is that a significant reduction in the consumption of power, gas, wear parts and working time saves an enormous amount of money. EWM technology convinced Ingo Romeike and Wilfried Erdmann. The two have been highly satisfied with EWM’s service and consultation as well. “We’d do everything again exactly the same way.”